My seemingly endless fascination with the Napoleonic Wars stumbles on.

Some time ago, I decided to start the forces for the initial fighting at Quatre Bras in 1815.  Actually, it's more like restarting a restart of a repeat of a repeat of a project I've been fascinated by for the past 50-odd years.

I don't know how often I've done figures for this battle in different scales; maybe it's because of the wide variation in uniforms in such a small battle. There are French line and light infantry in blue, line lancers and chasseurs in green, possibly some of the Dutch lancers of the Guard in red, artillery in blue and for the real anorak geeks, cuirassiers with and without cuirass.

Then there are the allies. Dutch-Belgian jaeger in green, militia and line in blue, Nassau in green and some in blue, British rifles in green, line infantry in red, highlanders and the good old 28th in the stovepipe shako. Some cavalry in pale blue.

So here are the first couple of units, finally getting some paint splashed on them. Now, for some oddball reason, I put the flags of the 23rd fusiliers on the first British unit, even though they were not at Quatre Bras. I think I just had the flags available.

These are CGM figures. 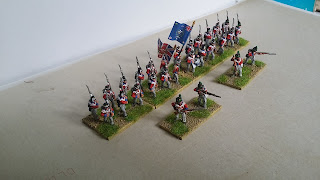 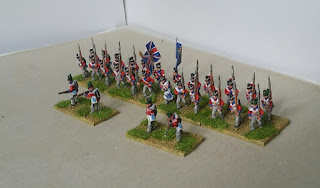 And a unit of Dutch-Belgian militia. 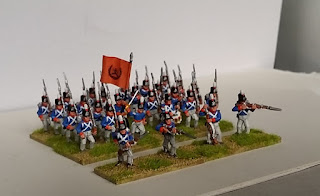 The painting style I've gone for here is my old favourite of basic but tidy, with the uniform colours just a little brighter than they might have been historically because I want to see them. They are, after all, just toy soldiers.

The basing for these figures is mainly for Black Powder, with a 24 figure unit as my standard unit. I deliberately chose to spread the figures out on four 40mm x 30mm bases. The skirmishers at the front are just representative - for the look of the thing.

I will try to keep the impetus going for this, though I've been recently tempted to try 10mm again, with lots of figures on a base.