So here is where I was at the end of the week.  The Indians are done and have already had a game of DBA on the table.  These are all Essex Miniatures 15mm. 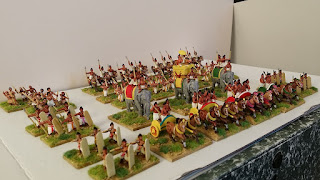 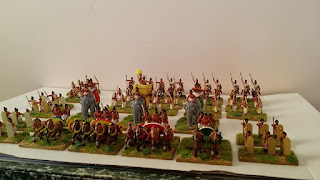 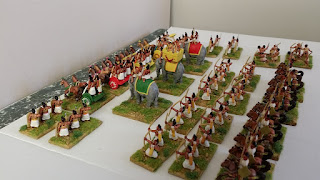 And the Napoleonic French Light Infantry. Nearly finished, but now looking like the finished article. I've still to finish the basing, sort the pompom colours which I mixed up, and finally add the flag. 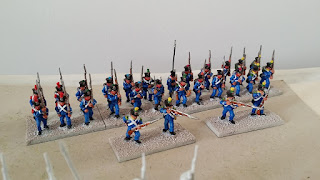 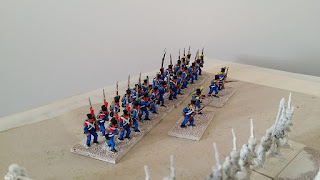 Just peeking in at the bottom of the last photo are figures for a unit of French Line infantry. These are next for the brush.

Just keeping on, keeping on. The Indians and some Napoleonic French Light Infantry that have been on a tray for a while are nearly complete.

Napoleonic French light infantry first. These are CGM figures with just the basing to do.  Except, as I look at the photo, I realise I've missed a shako pompom. Ah, well, these things happen.

Still, not to bad.  As usual, in recent years, I've gone for slightly brighter/lighter tones, just to make he figures look nice from a distance. 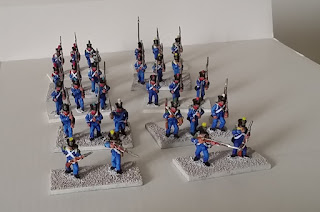 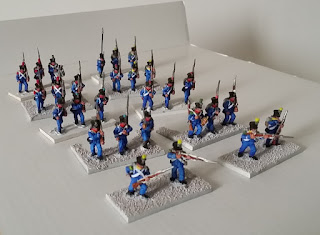 And the Classical Indians. Just the elephants to paint and assemble the chariot crews and the boss man in the howdah. Then I'll move on to finish off the basing at the same time I do the Napoleonic figures above. 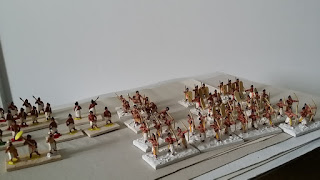 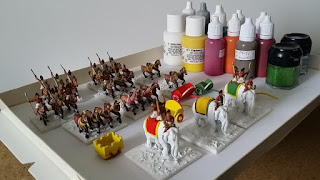 And that's it for now.

I've not painted anything for a long time, but after a friend mentioned DBA, I decided to have a look in my unpainted DBA box.

First the box, and in here are Indians, Persians, Greeks and Gauls/Galatians. I decided to start the Indians. 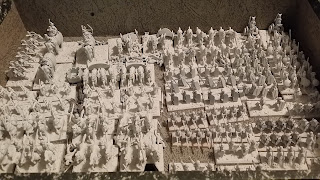 Here the first flesh paint has been applied. In the centre are two stands of Hordes where I tried the GW Contrast paints. I was pleasantly surprised by the result and I will use them again, selectively.  The other figures were painted with my usual thin semi-wash of flesh with an umber wash on top. 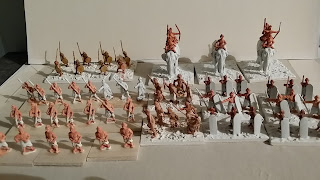 And this is the stage I've reached. I've tidied up the sarong with a pale flesh colour that looks like unbleached cloth and then added some white. In the bottom picture, I've applied the colours to the horses; again a thin semi-wash so that the paint flows easily in to folds and muscles. Next for the horses will be to add a black or dark wash to the fetlocks, mane and tail. 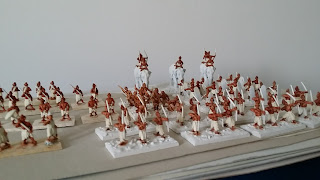 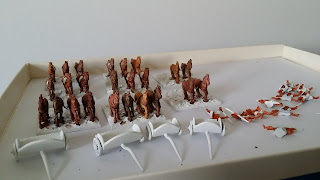 And that's it for now.  Though one other thing I've found is that my back was starting to ache after a while. I am a bit older, but I think I will have to look at my painting setup and my posture, and try to make sure that painting remains a relaxing and enjoyable part of the hobby for me.

Usually about this time I'd do a review of the games I played in the previous year.  This year it's a short list.

So here are the games I played at our club in January and February 2020, before everything closed down.

And that's it. Seven games. But they were good games.

In the rest of 2020 I did very little game-wise or painting, though I have read a lot of books; a lot of books.  A recent focus has been World War 2.

I read a biography of Eisenhower during the war and got a good understanding of the problems he had in leading an allied force.

I read Patton's War As I Knew It (a sanitised version), then read The Patton Papers (an unsanitised version). The latter had some really interesting snippets, including his perceptions of other commanders.  But two main bits stood out for me; first, an almost throwaway comment that an unknown senior British officer admitted that, after Patton won the 'race to Messina', the British high command tried to restrict his activities and opportunities, so as he would not outshine Montgomery.

The second comment was that in Normandy, the 21st Army Group commanded by Montgomery, required all armies, corps and divisions to submit a daily report showing the locations of each battalion.  This seems incredible and an example of the pedantic nature of British command.

There is a command doctrine I understand was used by Americans and other non-British forces, and now standard in NATO, was that officers issued orders to the level below them and knew the location of units one level below that. But that was it, and senior commanders did not get involved in lower levels of command. So, an army commander like Patton would issue orders to his Corps and know the locations of his divisions, and that would be it. This pattern would be repeated down the chain of command to allow each of the lower levels of command to do their job. And orders would be what to do and not tell subordinates how to do it.

I'm currently reading Nemesis by Max Hastings on the last two years of World War 2 in the Pacific. Interesting bits I've picked up on this time are McArthur's invasion of the Phillipines, and indeed the British retaking Burma, were actually unnecessary as the war was being won by the American amphibious forces closing in on the Japanese home islands.  Also of interest was the level of corruption and incompetence in the Chinese high command.

None of this is directly related to painting or gaming, but I find it interesting.

The silvery Tay and some 15mm/18mm units to paint

A non-gaming post. Today, to pick up some musical stuff, I was in Dundee. So I paused on riverside for a few minutes for a couple of pictures of the dear old silvery Tay. Not great pictures, but inspired by William McGonnagall.

Along each side of your waters, to Perth all the way;

This is looking south east at the rail bridge. The old foundations of the previous railbridge are just visible above the water line. 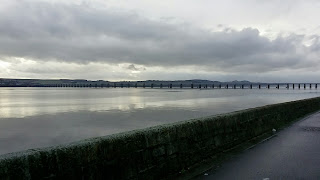 And a view south west of the road bridge. 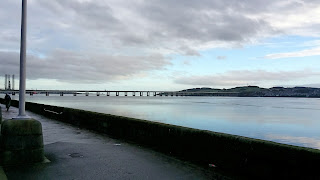 And some gaming stuff. Here are pictures of a couple of Napoleonic units I must get back to painting. The French Light Infantry are CGM figures, the green are AB Miniatures Dutch Jaeger.  I was thinking about sort-of participating in the Analogue Painting Challenge that many others do at this time of year, just to give a focus and a bit of impetus to painting more. 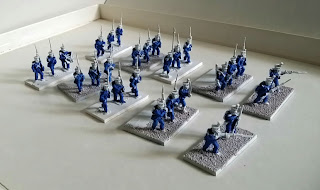 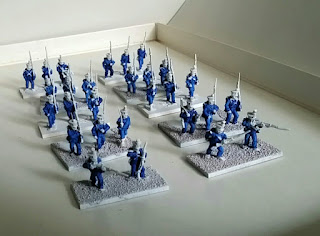 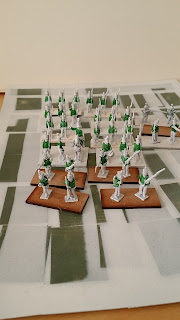 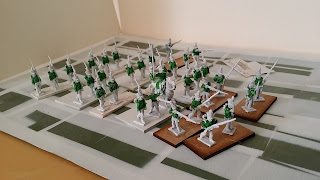 Just an update, following on from the last post.

After I had identified all the bottles with split nozzles, I wrote to Vallejo asking if I could buy new nozzles. The kind people at Vallejo sent me replacements. 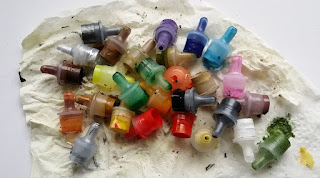 And in with the new. 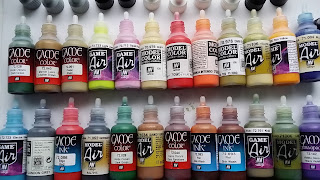 So now I can shake away to my heart's content and there will be no spill.

I think it would be good if Vallejo would sell empty bottles. Though the market make be limited, I'm sure some other painters / gamers would appreciate being able to buy spares.

Finally, in gratitude and appreciation to Vallejo for their kindness, I made a donation to charity on their behalf.

Not posted in a while, so I'll have to start posting more.  Not sure if anyone else has experienced this.

And this is not really a complaint, but just a moan. I've had a wee problem over the years with the nozzles on Vallejo paints being split. I don't think they've split while I have owned them, and as far as I know, the paint bottles have arrived with split nozzles.

When I pick up a bottle and give it a shake the paint comes out of the split and into the cap. It's just a bit of a mess; an annoying mess.

Here are some pictures. Hopefully you can see the extent of the split. 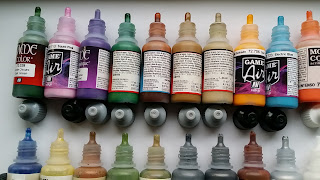 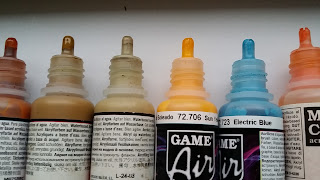 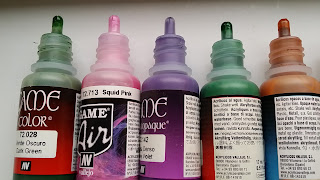 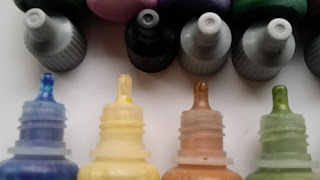 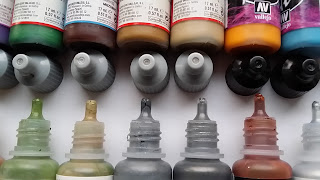 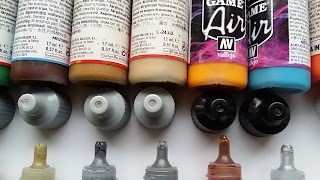 It's not too many in the grand scheme of things, but I now have 27 with spilt nozzles. So I have moved these paints out to a separate box.

Here are all of my Vallejo paints, some 450 and more.  I missed a few from this picture. 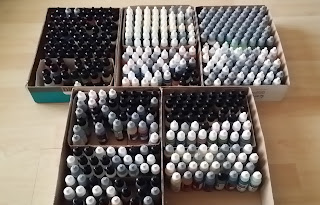 I'd like to replace the nozzles.  Does anyone know where to get them?

I know I can buy complete dropper bottles, and decant the Vallejo paint into those bottles. But it seems a shame to get new bottles instead of just being able to replace the nozzles.

I'll try to get back to painting and posting soon.