How to mess up perfectly acceptable figures

I'm sure everyone has done it at some point.  You have some painted figures, well painted, perfectly acceptable, and some voice in your head says "you could re-do that bit; make them better."

Well, I started from 6 bowmen here who are part of this group. They are the ones will the blue / deep red livery.  Here, they are fine; nicely done and ready for the addition of some flock grass . 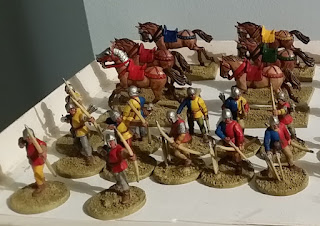 Now, there's a colour used in medieval and Wars of Roses times called Murrey, Sanguine or Bloody. No one is quite sure just exactly what the colour is, as different authors describe the same colour by different terms. It's often described as a purplish-red crimson.

These bowmen were intended to be in blue / murrey livery.  And for some 3 years they have been fine; they've been used in many games of Lion Rampant and some games of Hail Caesar. They've been fine for me and neither has anyone else.

And so this week a little voice in my head says "You could re-do that half of the tunics, make them better. Make them more murrey-ish."

And so I reached for purple wash, purple ink and paint and tried to "make them better". I didn't. I just made a muddy mess. This picture doesn't do justice.

I then gave the red half of the tunics a couple of thin coats of white as a fresh undercoat, and reached for some reds that were close to hand. I chose the Citadel Red Gore colour as a base representative of murrey. It's good enough and gets me back to where I was a few days ago.

And here I am again. I've added some shading with the Miniature Paints Burgundy colour and some black was carefully applied in folds.

The pictures don't readily give justice to the mistake and the repair, but it's a little lesson in not listening to the voices. If figures are fine and look good enough for a game, then that's what they are - fine and good enough.

My next task is to get back to tidying the rest of my Wars of Roses figures.
Posted by Tom at 04:24